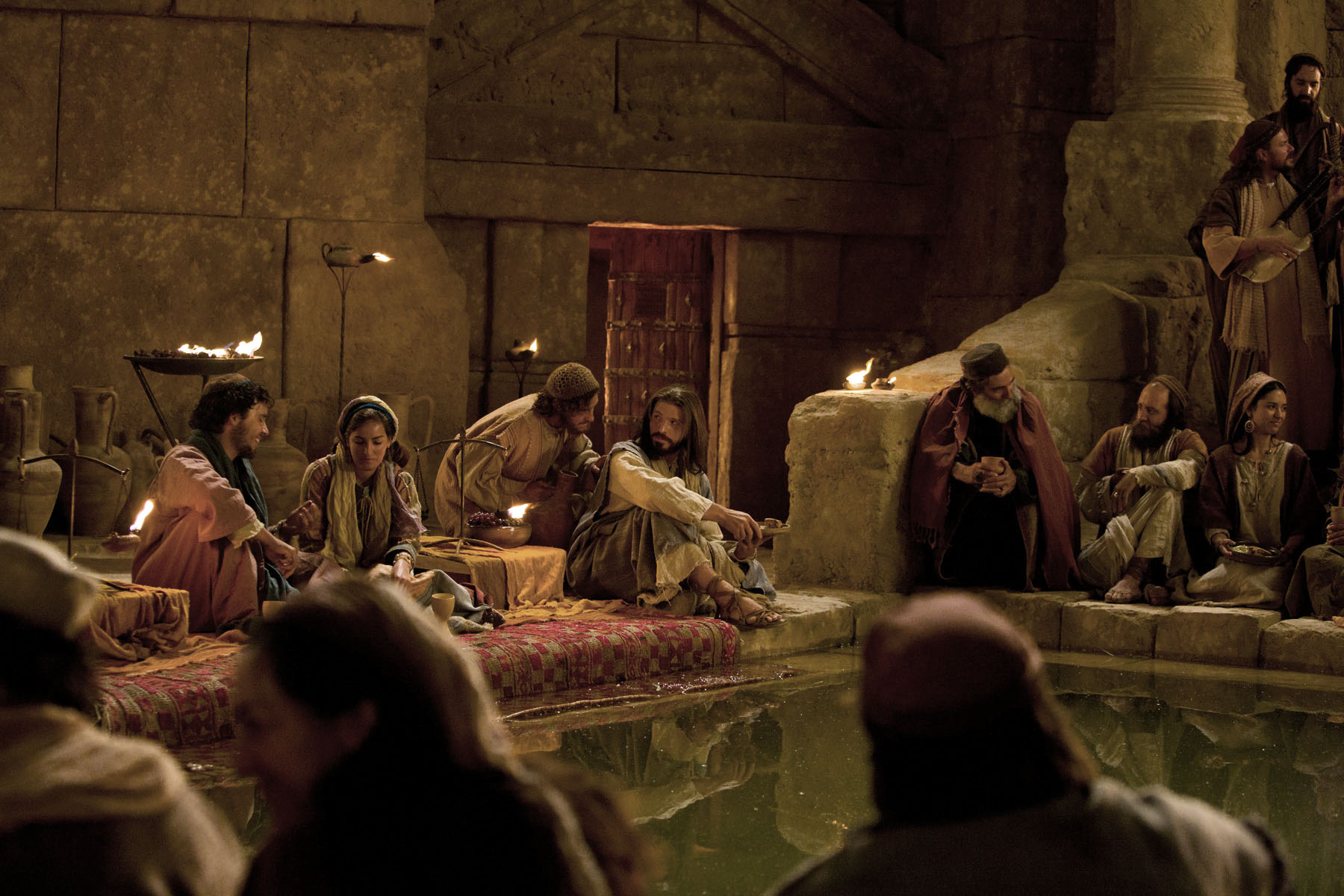 “WHY DON’T YOUR DISCIPLES FAST?”   Can you imagine Jesus sitting there with His disciples, and they’re eating and having a good time,  and a small group of people walk up, and ask this question?   Obviously, they could see they weren’t fasting, but why the question?  Why is this issue so important to these people that they would take the time to walk up to Jesus and ask Him this question?  And rather than just giving them a straight-forward response, Jesus tells them three parables, and the last two seem to have no direct relevance to their question, or do they?

IN PROPERLY INTERPRETING ANY BIBLICAL TEXT, CONTEXT IS CRUCIAL!  To violate this rule, only opens the door to misinterpretation, misunderstanding and error.  And yet, over the years, I’ve seen person after person violate this rule, take a passage out of CONTEXT, and twist it to say whatever they wanted it to say.   And until people are taught that there are RULES that we need to follow to PROPERLY INTERPRET any text, including the BIBLE, then we are not going to see an end to the erroneous ideas being circulated about what the Bible teaches.

A QUESTION ABOUT FASTING

To begin, let’s look at the question that initiates this discussion by comparing it in all three Synoptic Gospels (Matthew, Mark and Luke).

IDENTIFYING THE SPEAKER.  The first thing we need to do to understand a text is to identify who is speaking?  What I find interesting is that in comparing these three accounts, it is only Matthew who identifies the speaker as “the disciples of John.”  Mark and Luke do no identify the speaker at all, but they only refer to the speakers as “they.”

IDENTIFYING THE QUESTION.  Thirdly, we need to identify the question they are asking.  In two of the accounts (Matthew’s and Mark’s), the question is “Why do the disciples of John and those of the Pharisees fast, but Your disciples do not fast?” Therefore, the focus of the question is on why Jesus’ disciples are not following the same practice of fasting like these other two groups?

But when we come to Luke’s account, there’s more to the question.  In his account, the question is, “Why do the disciples of John fast often, and make prayers, and likewise the disciples of the Pharisees, but Yours eat and drink?”  We are being told, it seems, that the disciples of John often fasted, and not only that, but they “make prayers.”  Does this simply mean that they spent much of their time in prayer, or does it mean that they formulated prayers for those times of fasting?  Also, we learn that whatever John’s disciples were doing, the Pharisees were also doing it as well.  But the focus of the contrast here is on wondering why Jesus’ disciples are spending their time “eating and drinking,” and not doing what these other two groups are doing?

IDENTIFYING THE ISSUE.  Another important element we need to identify is the real issue underlying the question.   The real underlying issue here is NOT the lack of fasting, but the lack of HOLINESS AND RITUAL PURITY.   According to the Scriptures, God called His people to be “A KINGDOM OF PRIESTS AND A HOLY NATION” (Exodus 19:5).  Therefore, the belief in what constituted HOLINESS AND RITUAL PURITY were central concerns of both the ESSENES AND the PHARISEES.

Both these groups believed that they should meticulously observe the Law of Moses, keep the Sabbath and the feasts, practice circumcision, observe the dietary laws, fast, practice “ritual water immersion” (“water baptism”), but also that everyone should practice the PRIESTLY PURITY LAWS.  And although there were variations in what teachings received more focus or how they were to be practiced, each of these two groups had their own man-made teachings specifying the details on how these laws should be observed and practiced.

JESUS AND THE PURITY LAWS

Now although Jesus kept the biblical laws (as given by God), He and the Pharisees often conflicted when it came to these man-made rules regarding how one was to observe the various laws, such as the Sabbath and the PURITY LAWS.  These man-made rules, or what they called “the Oral Torah,” or what Paul called “the oral traditions,” were gathered and collected together by Judah the Prince in 200 A.D., and were then given the name “the Mishnah.”  Then between 200 A.D. and 500 A.D., the Mishnah became the focus of rabbinical study and commentaries, which were called the Gemara, and were added then to the Mishnah, formulating the Talmud.

An example of Jesus conflicting with the Pharisees in regard to the PURITY LAWS was in the need to “wash one’s hands before eating” (Matthew 15:1-20; Mark 7:1-23).  Since the priests were to wash their hands before ministering at the altar (Exodus 30:19), the Pharisees taught that wherever one ate one’s food, it was equivalent to the altar, and therefore, everyone was to ritually wash their hands before eating (A PHARISAIC BELIEF, NOT A BIBLICAL TEACHING).  If the hands were not “ritually cleansed” via “washing,” the PHARISEES believed, then the hands were “unclean,” and therefore whatever they touched became “ritually unclean” (i.e., in this case, the food).   So then, if the “unclean” food was eaten, then the person became “unclean” and could not enter into the Temple (i.e., the Presence of God).  As a result, the complaint that Jesus’ disciples were not washing their hands was not about cleanliness and hygiene, but what the PHARISEES saw as a violation of HOLINESS AND RITUAL PURITY. (However, Jesus did not agree with their belief that “dirty hands” could cause food to become “unclean;” see Matthew 15:20.  And since the food was not “unclean,” Jesus and His disciples were not made “unclean” by it.)

But what about the Essenes?  Why are they important in this conversation about the PURITY LAWS and FASTING?  Because according to many modern researchers, John the Baptist was raised by the Essenes of Qumran, the writers of the Dead Sea Scrolls, after the death of his elderly parents.  In fact, not only was much of John’s ministry done near Qumran, but he ate the same type of food that they did as well.  Therefore, when this is considered, it’s not too hard to see the connection between the Essenes, their belief and practice of keeping the “PURITY LAWS,” including “water immersion” (or “water baptism”), John the Baptist, his ministry and his disciples.   So by understanding his Essene influence makes it easier for us to understand why his disciples now are asking Jesus this question about His disciples’ lack of fasting.

JESUS’ RESPONSE TO THEIR CONCERN

FASTING AND THE BRIDEGROOM?

To begin with, Jesus responds,

Can the children of the bridechamber fast, while the Bridegroom is with them?  As long as they have the Bridegroom with them, they cannot fast.  But the days will come, when the Bridegroom shall be taken away from them, and then shall they fast in those days.  (Mark 2:19-20)

The term “bridechamber” refers to the room where the marriage ceremonies were held, and the “children of the bridechamber,” therefore, refers to the friends or companions of the Bridegroom.  Jesus is identifying Himself here as “the Bridegroom.”  And He’s telling John’s disciples that since He is here with them, this is a time for joy and celebration; it is not the time for fasting.  This, of course, alludes to Ecclesiastes 3,

With Jesus there with them, He said that this was their time of joy, laughing and dancing, but there will come the time, He said, when “the Bridegroom” [Jesus] will be “taken from them” [by His death, resurrection and ascension], and then, from that point on [“in those days”], it will be necessary for them to “fast.”

A CONTINUING PROBLEM WITHIN CHRISTIANITY

Over the centuries, Christians have traditionally misinterpreted the second and third parables.   They’ve “read into the text” their own personal or denominational thoughts, beliefs or values, or have practiced what’s called “EISEGESIS” (pron. “Eye-suh-jee-sus“).  This is an improper way of handling any written text, regardless of what it is, and this fallacious approach is still practiced by many Christians, even though it’s what often leads to misinterpretation, misunderstanding and error.

Instead, we need to raise up more evangelists, pastors, teachers, and those in authority to teach believers the right way to handle any written text, which is to teach them about the importance of CONTEXT.  There are some who are doing this, but not as many as who are not.  We need to teach them how to —

Once we have done this and come to understand the meaning of the text within these “CONTEXTS,” then we check “the correctness” of that interpretation and understanding by examining to see if it fits with  —

If the “alleged interpretation” contradicts any of the Bible prior to that passage, then our interpretation and understanding is in error.  We need to remember that a biblical text will NOT mean anything differently today than it did the day it was originally written.

Of course, this approach takes some time, research and study.  But as I said, once we understand the text within its proper CONTEXTS, then we want to bring that meaning forward into our situation today and see how it can be applied.  This is known as “EXEGESIS” (pron. “Ex-uh-jee-sus“), which is the proper way to handle any written text.  But unfortunately, again, what I’ve observed being practiced in many churches is EISEGESIS – NOT EXEGESIS.

Return to the Top

This is the website for Following Messiah, which discusses our ministry, our teachings, and our adventures in following the Messiah Yeshua/Jesus in our day-to-day lives.

“YOU ARE MY ADOPTED BRIDE, LISTEN UP!”

“OPEN UP YOUR HEARTS,” SAYS THE LORD!

A Morning Workout, Head Coverings, and the Days Ahead